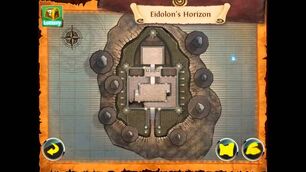 Eiodolon's Horizon (EHN/EHL) is a dungeon located at the Platfrom of Matyr, west of The Suspended City in Sinskaald Rift.

The recommended level is 60 for Normal Mode and 70 for Legendary mode.

Way of Fear - There are a total of 9 mobs, 3 protecting each crystal. They have low HP and are easily killed with AoE.

Way of Torment - There are a total of three mobs, one protecting each crystal. This mob has more HP but is killed quick with decent DPS.

This dungeon is worth a total of 40 exh, but it has a port before last boss (which will kick out any players trying to go through it at 100 exh.)

There are three bosses and the optional boss Lamiyt for players with the quest A Sultan's Lament.

Healique is a large gargoyle-esque stone face in the wall. He will silence players standing at ranged distance throughout the fight. When he takes any AoE type damage, he may spawn purple circles (up to 4) on the ground that will cause instant AoE damage.
Once combat begins, the room will be sealed off. Make sure all players are in the room before starting this boss, or they will be locked outside the room.

Wethive is the floating demon on a platform surrounded by lava. She will charge a player at random and cast an AoE that will hit anyone in melee range. When she charges, the AoE can be avoided by running out of her melee range. With geared teams, the tank is strongly encouraged NOT to take aggro. Wethive will put a 80% damage reduction debuff on 1-2 players at random that do not have aggro; therefore, if the tank does not have aggro then DPS can do more damage.

Nacher has unique abilities and some players consider this fight to be an indicator of how well their team knows their class and dungeon strategy. He will sleep a player at random, but any damage that player takes during their sleep will wake them up. Players can also free will out of this. During the fight he will cast shadow bolts at a random player. When a red/black circle appears on the ground, move out of it or it will cause damage every second to the player that is standing in it. To avoid circles on the tank, the tank and any melee DPS should fight Nacher at max melee range.
When Nacher is about 50%, he will summon a random mini-boss. Tank needs to aggro that boss and all DPS need to focus on that, as Nacher will take 0 damage when the mini boss is up. After killing it, go back to Nacher.
At about 5% Nacher begins a very slow cast. During this time he will take a lot of damage, and the idea is to kill him before he finishes casting. When he's done casting there will be a circle on the ground and floating mobs will spawn in one at a time, and circle the room. They will cast shadow bolts and hit any players they walk into.

Also referred to as Lava Boss, or Sigil Boss.

Retrieved from "https://orderandchaosonline.fandom.com/wiki/Eidolon%27s_Horizon?oldid=31170"
Community content is available under CC-BY-SA unless otherwise noted.