Flame Knights have dedicated their lives to executing the will of Khalin. Some of them choose to act as protectors, while others are forged into deadly exterminators by the fires of their crusade. With proper training, each knight can develop the ability to turn into a powerful angelic creature during battle.

Flame Knights (generally shortened to Fk or Fks) are the latest class available, introduced in update v2.10.0 (May 27, 2015). They are a hybrid class between a Warrior and a Military Monk due to their ability to perform the role of either (tank or melee dps). Flame Knights are primarily a melee class but have ranged Spells as well.

Any player with a level 70 on their account and an available player slot can create a Flame Knight. Flame Knights enter the world at Sanctuary on Flare Island at level 65. Several quests are available to level up the Flame Knight to 70 quickly.

It's preferred to create a Flame Knight with the same race as the level 70 on the same account, so the Flame Knight can obtain all shared mounts on the account and have the riding permit to use them.

A major perk with Flame Knights is that they do not need any craft. All Flame Knight gear that drops in Dungeons are already epic.

Some abilities use Power to perform. Power is exclusive to Flame Knights. It is generated through certain attacks and will diminish over time, much like how Morale diminishes over time with Warriors.

Mana is the great downfall of Flame Knights due to the significantly low mana return during combat. They often run out fairly quickly. It's best to practice on a Target Dummy to find a good rotation, and to alternate Power abilities with Mana abilities. 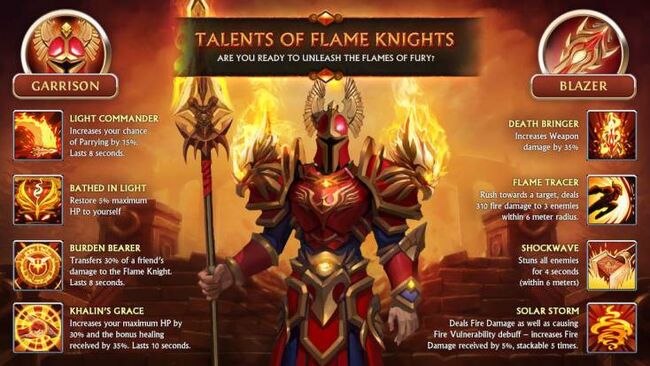 Flame Knights can only wear Metal Gear/Plate and are very limited on what they can equip. Since they were introduced well after the level 70 cap, they can only wear level 70 gear.

Along with the above Item Sets, Flame Knights can also equip:

Flame Knights are very limited on the type of weapons they can use.

The only Ranged weapon they can use is the s3 weapon Razorwind Chakram.