Edit
watch 01:36
We're Getting Mutants in the MCU - The Loop
Do you like this video?
Play Sound

Mages are proficient in controlling the power of the elements. They cast powerful spells on their enemies, and have various tricks that allow them to be dangerous from a distance. Different talents allow them to kill multiple enemies rapidly or keep themselves and their team alive by incapacitating hostile mobs and players.

Mages mainly relies on their spells to attack, although they are able to wield some daggers for melee attack as well. The weapons that Mages can use are limited to staves, certain daggers, some swords, and spellbooks (wielded in the offhand slot). The majority of Mages choose staves as their weapon as they provide bonuses that are useful for enhancing spells.

Mage talents were reworked in update v3.0.0 (Sep. 07, 2015) combining both frost and fire into Elemental and a new talent tree for Stargazer. For a look at the original talents, see Mage Talents (old). 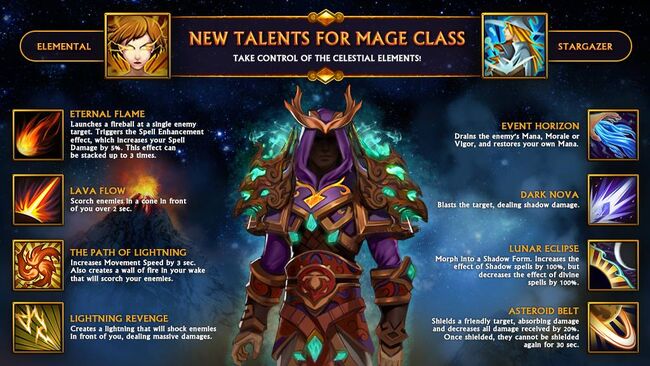 This talent tree combines both frost and fire into one DPS spec. A lot of spells have been reworked and while this spec is generally considered ranged DPS it also has heavy hitting spells that increase in damage the closer to the target they are.

Mages now have a talent tree to provide healing, but Stargazer also provides team support abilities with individual and team damage reducing shields. As Stargazer they can use Shadow Form, decreasing healing but increasing shadow damage spells, which is viable ranged, burst DPS. With this spec a mage can perform both main healing and DPS in a team without having to respec, but Shadow Form has a global cooldown of roughly 2-3 seconds and may be tricky to swap between the two during combat.

Community content is available under CC-BY-SA unless otherwise noted.
Advertisement