Start a Wiki
Many races exist in Order & Chaos Online, though only five are available for players to choose from. They are comprised of two factions: Order and Chaos.

Races associated with the Order faction include Human and Elves. Orcs and Undead belong to the Chaos faction and Mendels are neutral. Factions have no bearing on gameplay, since lore is basically nonexistent and there is no solid history in this game universe. All races can interact with each other in the same towns, cities, dungeons, etc. Players are only hostile to each other in world PvP zones and PvP arenas.

Each playable race has a race mastery, +1% bonus to one or two of their attributes, and varying starting stats. The differences in starting stats are so minimal it's rarely used as a deciding factor in creating a character. 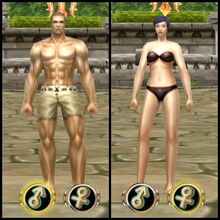 Humans begin the game in Arcadian Forest.
"Humans always look to the horizon. They chase power and want to change the world, whether for good or for ill. Their settlements are among the brightest lights in a dark and untamed world. Humans constantly seek to explore new lands." -- Character creation description 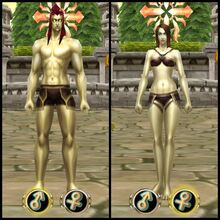 Elves begin the game in Arcadian Forest.
"An ancient race with strong ties to the forest, elves have a detached view of the world. They often have difficulty believing that events in the world have much importance to them, for they consider consequences in terms of centuries." -- Character creation description 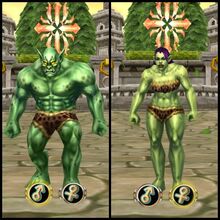 Orcs begin the game in Tanned Land.
"Orcs love close combat and plunge furiously into the thick of battle, giving no thought to retreat or surrender. People think they are savage, bloodthristy marauders, but pride and hero worship course deep in the blood beneath their green skin." -- Character creation description 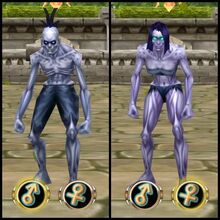 Undead begin the game in Tanned Land.
"The undead have journeyed to the end of the night. Some have found wisdom, and others only sorrow. A selfish and cunning race, they have all the time in the world to pursue their dreams... until they become nightmares." -- Character creation description 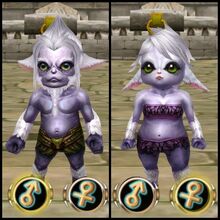 Mendel players begin the game in Mendel Village.
"The Mendels are a lovely race who live in the Under Realm. Unlike their evil neighbors, Mendels are good people and are always eager to help others. Though most Mendels have never learned how to fight or use weapons, some have been "selected" to perform the duty of protecting the tribe or punishing evil. They are called "Chosen Ones"."
-- Character creation description

The Daisauros people are the reptilian inhabitants of The Great Desert.

Saithions are an intelligent race of snake-like reptiles. It is possible that they are controlled by the Wyrgast (the High Council of dragons) and that there are other "rogue" pockets spread throughout Haradon.

The interactions between the player and this race is usually intense to say the least.

The origin of this race isn't known for sure, though playing through Swamp of Wyrms reveals that a lot of the Saithion population there comes from an underwater entrance near Port Verecy. Which leads to the speculation that they may be able to "breathe" underwater.

Goblins are a race of small, human-like creatures who cause trouble for NPCs in the early parts of the game. Most Goblins are enemies, but one peaceful Goblin lives in The Swamp of Wyrms at Port Verecy named Farekron.

Retrieved from "https://orderandchaosonline.fandom.com/wiki/Races?oldid=30632"
Community content is available under CC-BY-SA unless otherwise noted.