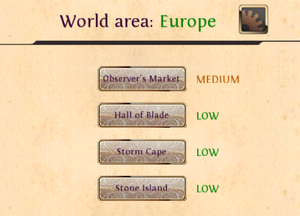 Realms are the different servers in Order & Chaos Online, divided across three continents; America, Europe and Asia. You may play on a server that is not located in your section of the globe, but it may cause lag.

After the update on June 30, 2011, it is possible for players to transfer to another server. This is done on the character list screen and costs 30 runes.

When transferring servers, that character will lose his/her guild, friends, and items in their mailbox and in the Auction House. Players who have transferred have to wait 7 days later to transfer again.

Retrieved from "https://orderandchaosonline.fandom.com/wiki/Realms?oldid=32435"
Community content is available under CC-BY-SA unless otherwise noted.